South Bend is a city in f St. Joseph County, Indiana, United States. As of the 2010 census, the city had a total of 101,168 residents; its Metropolitan Statistical Area had a population of 318,586 and Combined Statistical Area of 721,296. It is the fourth-largest city in Indiana, serving as the economic and cultural hub of Northern Indiana. The highly ranked University of Notre Dame is located just to the north in unincorporated Notre Dame, Indiana and is an integral contributor to the region’s economy.

Since the 1960s, education, health care, and small business have come to the forefront of South Bend’s economy. Nearby University of Notre Dame is a large contributor to the local economy.

Health care is another major contributor to the South Bend economy. In 2012, Memorial Health System announced that it was merging with Elkhart General Hospital, located in Elkhart County, to form Beacon Health System. Other notable businesses include Honeywell, Bosch, and PEI Genesis. AM General, Crowe Horwath, Martin’s Super Markets, and Schurz Communications all have corporate 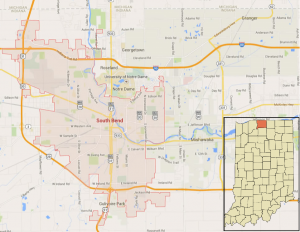 Neighborhoods in South Bend, IN